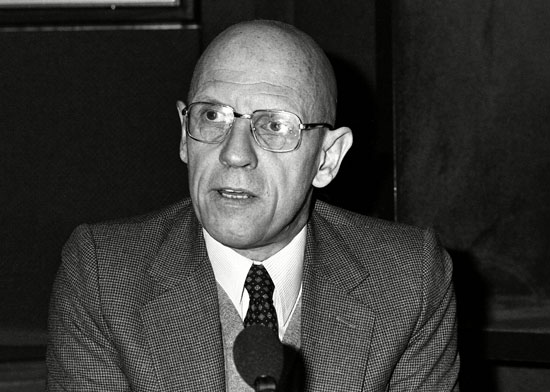 Michel Foucault (1926-1984) was born and lived the majority of his life in western France. He received his Bachelor's and Master's degrees at Ecole Normale Superieure and completed additional doctoral work at the University of Paris. While working at Blaise Pascal University in Clermont-Ferrand, France, Foucault published several of his most famous works: The History of Madness, which examined the "history" of mental health treatment; The Birth of the Clinic, which followed the roots of the medical professions; and The Order of Things, which examines the origins of the human sciences, particularly linguistics, biology, and economics. These publications had an immediate and pronounced effect on how histories were viewed within academia. As a result, Foucault was invited to lecture across the United States and Europe. His work was especially popular among traditionally marginalized populations like women and ethnic minorities.

In 1968, Foucault transitioned to University of Paris VIII, where he published arguably his most successful work, Archeology of Knowledge. In this book, Foucault outlined the analytical method employed in his previous works. Archeology of Knowledge served as a guide for a generation of researcher inspired by Foucault's willingness to challenge accepted precepts in the social sciences and society in general. Foucault followed this publication with two more - Discipline and Punish, published in 1975, and the History of Sexuality, published in 1976. These books continued to expand on the methodologies and concepts of Foucault's prior works, introducing the idea of knowledge and power relationship to a global audience.

In the early 1980s, Foucault famously served as a visiting professor at the University of California-Berkeley, where he recorded a series of lectures in English. Foucault traditionally preferred to speak French in guest lectures and interviews, so this was a major development for scholars who had only heard Foucault through translations. Over the next few years, Foucault also lectured at New York University, California-Los Angeles, and the University of Vermont. Foucault, unfortunately, also began at this time to suffer from complications from HIV, which he had contracted in 1980 (and was one of the earliest public figures to acknowledge contracting the condition). In 1984, Foucault returned to Paris, where he gave his last series of lectures before passing away on June 25th, at the age of 57.